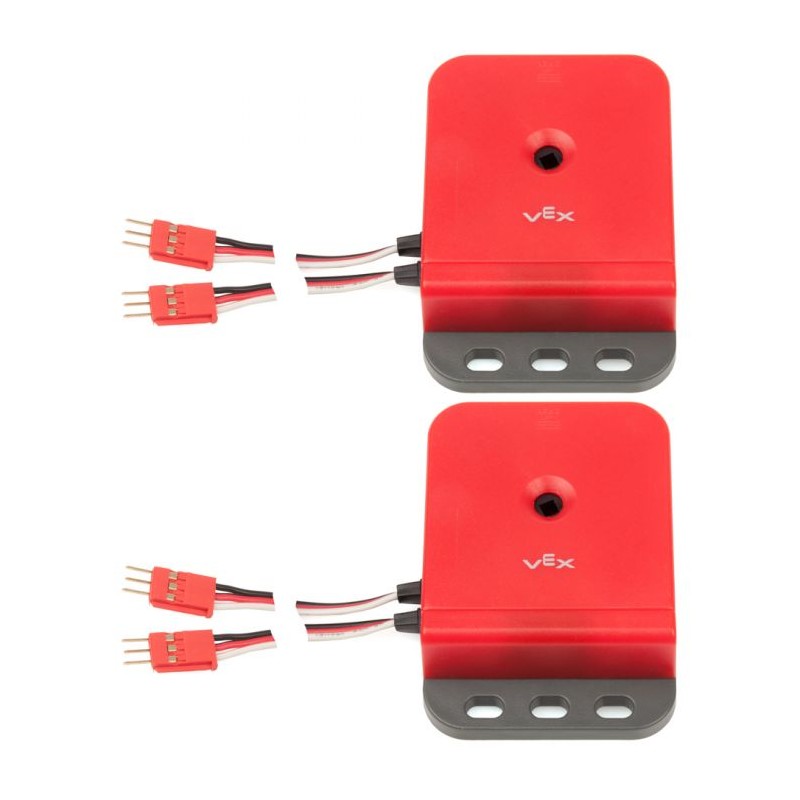 With the Quadrature Encoder's two output channels you can measure both the position and direction of rotation of a VEX shaft. This will allow you to calculate the speed of the shaft, as well as the distance it has traveled using programming software. Encoders are typically used for “infinite rotation” applications, such as a drive wheel. A Programming Kit is needed to change the program in the VEX Controller to use the Quadrature Encoder.

The Optical Shaft encoder is used to measure both relative position of and rotational distance traveled by a shaft. It works by shining light onto the edge of a disk outfitted with evenly spaced slits around the circumference. As the disk spins, light passes through the slits and is blocked by the opaque spaces between the slits. The encoder then detects how many slits have had light shine through, and in which direction the disk is spinning.

The Optical Shaft Encoder can be used to improve a robot in various ways. The encoder can measure rotational distance traveled and speed, which can be used to monitor, for example, the angular position of a robot gripper arm or the speed of a robot. Knowing these parameters can greatly assist you with performing autonomous tasks with your robot.

The Optical Shaft Encoder can be used to track distance traveled, direction of motion, or position of any rotary component, such as a gripper arm. The encoder can also be used to detect movement, which could facilitate richer interaction between the robot and its environment (e.g., human-robot interaction). If a human moves a robot arm that is attached to an encoder (e.g., during a handshake), the robot detects the arm movement and the direction(s) and distance(s) traveled, helping the robot classify the interaction as a handshake.